This is cultural appropriation in action. An occultist who once claimed: «‹Tribalism›, ‹ethnic›, ‹racial›, ‹folkish›: these are all common buzzwords for the same thing,» even though Hellenes had no concept for «race,» presents a «Declaration,» called «Xenia,» the aim of which is to create «unity within the Hellenic polytheistic and pagan communities,» (sic!), although she is an outsider and thus has no influence in Hellenism. This colonialist attitude toward indigenous traditions is one of the reasons why the indigenous Hellenic people reject occultism, neopaganism and the other para-Christian paths of the Occident. It's just a new emanation of monotheism and in some ways the religious wing of Cultural Globalization.

The author belongs to groups who, as YSEE best puts it, «are simply disguised as 'Hellenists' for reasons that exist hidden within the depths of their own minds.» Obviously we don't want to maintain any relationship with followers of the para-Christian paths who are exploiting and distorting our ethnic tradition and projecting the stereotypes of their own culture onto Hellenes, simply in order to satisfy their personal needs. The only «Declaration» that is important for us is the «Declaration of the World Congress of Ethnic Religions» and, most importantly, the «Declaration of War Against Exploiters of Lakota Spirituality.»

If you replace the words «Indian» and «Lakota» in the Lakota Declaration of War by «Hellenic» and «Hellenes,» you will get the Hellenic stance on the use or exploitation of our tradition, whether by spiritual colonialists, nationalists or other anti-Hellenes.


SAY NO TO THE CULTURAL APPROPRIATION OF INDIGENOUS TRADITIONS! 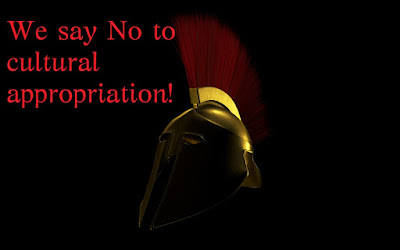 Link to the Declaration of War Against Exploiters of Lakota Spirituality:
http://www.thepeoplespaths.net/articles/ladecwar.htm